One of Mumbai’s jewels is its principle museum, the Chhatrapati Shivaji Maharaj Vastu Sangrahalaya (previously known as the Prince of Wales Museum). The museum is a veritable treasure trove of pan-Indian sculptures, paintings, objet d’art and fabrics. Among its most exceptional exhibits are the glorious terracottas from the exterior of a stupa at Kahu-jo-daro, Mirpurkhas, in the Sindh province of Pakistan, dating to the late fifth or early sixth century CE. Mirpurkhas is located on the ancient trade route known as the Aprāntapatha which leads along the west coast from the Bolan Pass in the north to Trivandrum in the south. Unlike most museums which relegate terracotta art to a dark corner, or label them ‘minor arts’, the CSMVS has placed some of the Kahu-jo-daro exhibits in pride of place its spacious entrance atrium.

The brick stupa was excavated by Henry Cousens between 1909-1910.  Originally the monument had two terraces, a dome and an entrance to the west. Now only the square basement terrace survives in a ruined state. Around this basement terrace ran a series of pilasters and between each pair of pilasters was a niche enshrining a seated Buddha, eleven in total, although only seven survive (one is in the V&A Museum). Though the Buddhas of Kahu-jo-daro have their own uniqueness, they bear a strong stylistic likeness – especially in the treatment of the facial features – to Buddha images from Mes Anyak and across ancient Gandhara. The relief sculptures were originally painted with coloured slips and traces of this can still be seen in places. The monument was also decorated with terracotta bricks carved with geometric designs, leaves and flowers, and lion heads.

The exquisite Buddhas are seated on lotuses and in the lotus position. The lotus is one of the eight auspicious symbols of Buddhism and represents purity. The Buddhas hold their hands in a gesture which symbolises meditation. Their eyes are downcast and they look at nothing in particular as though thoughtless and detached from their surroundings. Even though the composition is the same, each Buddha is slightly different and this variety adds charm. 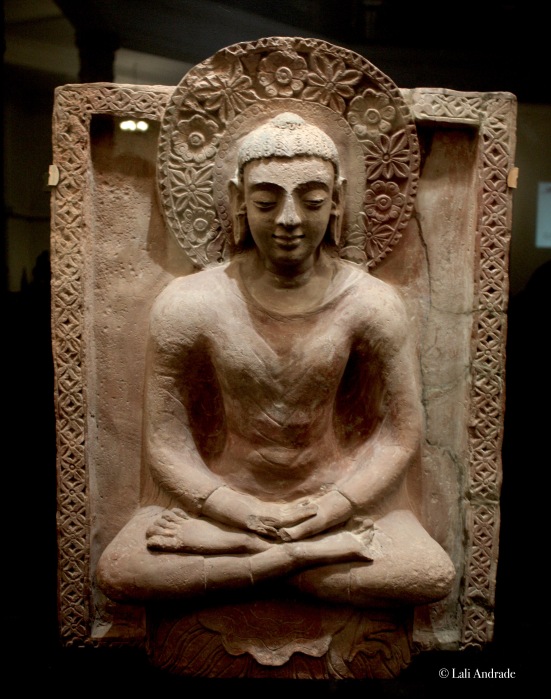 Earlier this month the Minister for Culture, Antiquities and Tourism in Sindh, Syed Sardar Ali Shah, announced his intention to preserve the ancient site of Kahu-jo-daro (at least what is left of it) and build a museum in Mirpurkhas. He also suggested that UNESCO will help them to repatriate the Mirpurkhas antiquities from India and the United Kingdom. 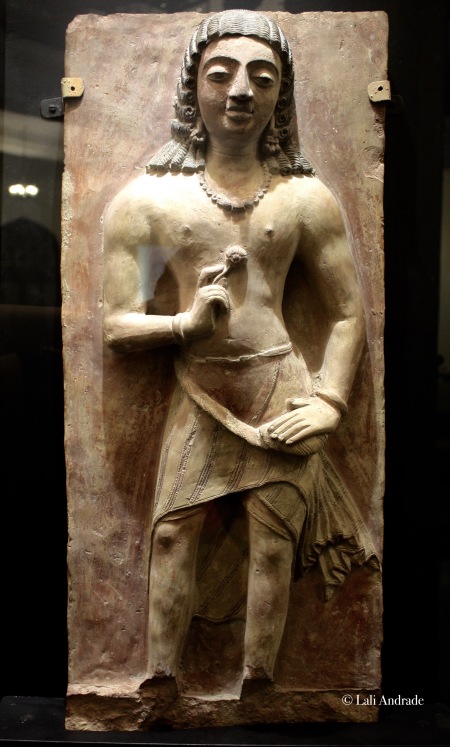 This terracotta roundel might depict Kubera, god of wealth.

This same type of beautiful elephant is found on most monuments of the fifth century CE.

This narrative image depicts Queen Maya giving birth to the Buddha in Lumbini, out of her left side. She is often shown clutching a tree above her head as she gives birth.

This small fragment depicts a kirtimukha or lion head spewing pearls. It is an image found on most early temples.

I am a UK based historian of South Asian art, architecture and archaeology. View all posts by Lali Andrade

This is a text widget. The Text Widget allows you to add text or HTML to your sidebar. You can use a text widget to display text, links, images, HTML, or a combination of these. Edit them in the Widget section of the Customizer.
Follow Art of South Asia, the Silk Road and Beyond on WordPress.com